10 questions to test yourself with this morning...

1.       The TV Series  “Call The Midwife” is based on the books of which British nurse and musician?

2.       The ‘Pharmaceutical Paintings’ are the first in the series of “Spot” paintings by which famous artist?


3.       Which Italian novelist is best known for his work “The Tartar Steppe”, the story of Giovanni Drogo and his life spent guarding the Bastiani Forest?

4.       Known as the sea swallow due to its slender shape as they swoop over water, which bird has the longest migration pattern known in the animal kingdom?

5.       Which Hindu Goddess is often portrayed standing or dancing on her consort, Shiva, who lies clam and prostate beneath her?

6.       Which Battle of 1859 was fought 12 miles outside of Milan between France and Austria, occurring during the second Italian War of Independence, in which the French under Napoleon III scored a decisive victory?


9.       Which British motor racing driver is the only man to have won World Championships on both two and four wheels?

10.   Who wrote the novel  “Gentleman Prefer Blondes”. Published in 1925 which Edith Wharton called it the “Great American Novel”?

My final book suggestion for the month. Another quiz title which I have been working on over the past few weeks. This time its the Telegraph Quiz Book written by Mastermind Champion (and still the youngest ever champion I believe) Gavin Fuller.

Again, around 4000 questions are included, with each set finely balanced to include some easy ones to get you going, going all the way up to questions that will test even the most seasoned players.


Posted by DanielFullard at 14:37 No comments: 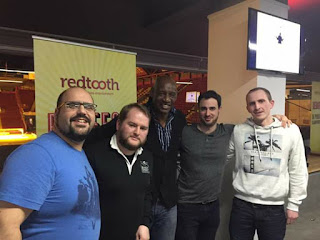 Last weekend at Bramall Lane, Sheffield RedTooth launched what I hope will be an annual event to combine all their major avenues....Poker, Darts and of course Quizzing! Before I go into detail, I would just like to start off by saying the event was easily the most fun I have quizzing and a credit to all involved!


I arrived late on the Friday Night so only caught the end of The Chasers vs Eggheads special contest (Jenny Ryan, Paul Sinha and Shaun Wallace vs Kevin Ashman, Barry Simmons and Dave Rainford) in a buzzer quiz. I think, in terms of the quizzing events, this was the most popular event of the weekend and seemed to go down a treat. The Chaser's won and then it was into the bar for a Late Night Show involving Paul Sinha's superb stand up and Jenny Ryan on the Ukelele. A fun night....in fact too fun as I found myself rolling into bed at 3am with a quiz the next morning.

When you get up for breakfast as see the British Quizzing Champion tucking into a Full English, then you know it could be a tough day and the room was filled with around 20 teams for the team quiz with £2600 worth of prizes up for grabs. Firstly, I must say a huge thanks to Tom Mead, Sam Roberts and Colin Daffern for allowing me to make up the numbers in their team otherwise I wouldn't have had chance to take part!

The morning element of the team quiz involved 3 rounds of General Knowledge, a music round, a picture round and a theme round (questions related to blue) and provided a stern tests. The idea being that the top half of the teams would compete for the big money and first prize, and the second half would play for lesser money in the plate. A good way to work thing in my opinion and indeed it did work very well. We qualified in third and headed into the afternoon session....

The format in the afternoon mimicked the morning, and we got off to a good start being in a three way tie for second at half time. Dropping only two points in the second half of the quiz (failing to identify a Hot Chip song) we knew we must have had a chance of second. Indeed, a team containing Paul Sinha took victory (by what in the end was 3 points) and we were left in a 2-eay tie for second with a very strong team containing British Quiz Champion Nic Paul and a wave of top quizzers. We decided to negate the Tiebreak and split the £1000 prize money.

A really enjoyable day, good company and a good selection of questions, with a result that we can be very proud of considering some of the teams in the room. The night was capped off with a more informal buzzer quiz, followed by another late night in the bar.


The Sunday was the individual quiz, which was 10 rounds of 30 questions over the course of two sessions. The questions were presented in a Pub Quiz style and were more Pub Quiz style than other organised events which was a refreshing change. In fact, even though my result was awful (which was what I expected given the calibre of players in the room) I enjoyed this individual quiz more than many individual quizzes I have done over the years. At least, with the questions I got wrong I had at least heard of the answers!! Fun questions, a great format, good company and again a great end to the day! I sneaked a second place in the Picture Round to add a little more winnings to the pot too!

Congratulations go to Nic Paul on a superb win and credit to all involved at RedTooth for a fantastic weekend!


I cannot speak highly enough of the event and, after an announcement made towards the end of the weekend, roll on Redfest 2017!

Another book I have been working my way through lately has been "The Joy of Quiz" by Alan Connor. Alan works on Only Connect and you may have heard him on radio, or read in various newspapers, his promotion of this title. After reading the book over the last week, I would highly recommend it no matter how serious you take your quizzing. From the story of Trivial Pursuit to a look at the modern quizzing scene it covers everything. (See link below)

In addition, if you like the above title, then one book definetly worth reading (and available for pennies from Amazon) is the "Brain Men" book from Marcus Berkmann.  Another great look into the "serious" side of quizzing written in a very entertaining manner..

Just a brief mention if you haven't had chance to look at the listings, but one of my favourite quizzes returned to the air recently. Round Britain Quiz! A unique format, almost always brutally challenging and this year containing Paul Sinha from the Chase.

You can download the questions and play along too, which is always a nifty feature.

Broadcast Mondays on Radio 4 and obviously available on Iplayer thereafter. (HERE)
Posted by DanielFullard at 15:08 No comments:

Venue: Fitzgeralds, Sunderland
Time/Date: Thursdays at 8.30pm
In the next in my series of posts reviewing Quiz Nights in the North East, I move onto to one of my favourites.
Fitzgeralds is one of the most popular traditional pubs in Sunderland, serving a wide range of ales and has had an established quiz night for as long as I remember. The venue is located in the heart of Sunderland City Centre and a dedicated room is used for the quiz. The questions are written by a dedicated setter (always good!).
The quiz varies in terms of popularity, for example in the last two weeks we were competing with 4 teams one week and 11 the next, but its a good, regular crowd and cheating is not evident.
The format involves an initial 20 question hand out which you are given half an hour to do. The questions are quite challenging for pub-quiz level and always give you something to think about. The highest score is never more than 16-17 on average with the lowest teams on average getting 10-11. I for one, like being given the time to look at and think about the questions, which is one reason I find this quiz so much fun!
The only negative aspect I have, is what comes next and that's the picture round. 20 pictures to identify. Now, don't get me wrong, I enjoy picture rounds but the quiz tends to be out of 62-65 points, and having 20 of those on pictures means this round usually determines the winners. The scores can vary massively, for example one week I thought I had done well getting 12 (average score around probably 13-14) and when the scores were read out discovered trams have hit 18 and 19. That's pictures for you!
A trivial pursuit round follows which is read out as a normal pub quiz. 2 questions from each of the categories on a Trivial Pursuit Card (although Art and Literature has recently been scrapped in favour of having a TV pair and Film Pair).
The final round is 10 questions on a given subject.....recent subjects include Horror Films (for Halloween), Tv Sitcoms, Crime and Punishment, Chemistry. Usually contains 3-4 gimmies and 6 to get your head around. The score tends to be low for these final two rounds giving a chance to catch up.
The pub pays out a lot of prizes throughout the night with a cash prize for the winner, 2 x pint tokens for the round winners and there is also a jackpot every round with a further 2 x beer tokens available so usually every team leaves with something.
All in all this is one of my favourite quiz nights in the region. The only criticism I would have is that starting at 9pm and finishing at 11pm, it could do with another round or two added but that's a minor criticism on the whole. A very good quiz all round and one I would recommend if you are ever in Sunderland and seeking a quiz!
As mentioned, my aim with this series of posts is to build up a selection of reviews and information on Quiz Nights in the North East. It's very annoying trying to find a quiz night online and hopefully these posts will give people keen on quizzing a little more information.
I am also ranking the quiz nights as I go, and will contain an updated rank at the end of each review.
At Present -
1. Fitzgeralds, Sunderland - Thursdays
2. The Willow Farm, Cramlington - Tuesdays﻿
Posted by DanielFullard at 14:42 1 comment:

Long time readers will know that I have been playing in the Sunderland Echo Quiz League for around 4 years now, and whilst every season the standard of questions is high, they have never really been made available online until now. (Other than my sets I post up here)

Anyway, the good news is that the questions are now available online and can be found HERE. The League is played each Wednesday and the questions usually appear shortly after.

If you are living in the Sunderland area, and are interested in playing in the League, then please pop me an email to fully234@hotmail.com and I will put you in touch with the relevant person :)

Posted by DanielFullard at 14:38 No comments:

Released this week, I have been working my way through the new quiz book from Olav Bjortomt (European Quiz Champion) which is a real treat. If you read The Times you will have noticed his quizzes appearing in there, and they are always a cut above other newspaper quizzes.

This book is well worth investing in (see link below) and with around 4000 questions will keep you going for some time. Already learned quite a lot and I am barely a fifth of the way through!

Posted by DanielFullard at 14:21 No comments: