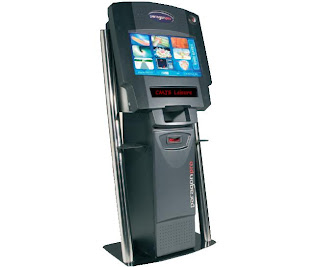 Feeding on from the introduction I mentioned that the Pub Quiz Machine tends to be something to which I am drawn to every time I happen to around one. I know they are fixed and know that they should be approached the way you would approach a fruit machine and although I have had minor wins in the past I know a trip to the quiz machine, whilst fun, will also end up being costly.

Over the next few weeks I am just going to be looking at some of the most popular quiz based games on the systems in and around your local pubs and have a chat about the various games on there.

Starting with my favourite.....

Based on the TV game show, Wipeout, Eliminator is a simple concept.... presented with a theme and 16 (I think) possible answers you are given the task to find the correct 8. Its a simple and fun touch screen game that works better played in large groups. You are of course on a testing timer that allows little time for serious debate and encourages mistakes. You have lifelines including 2 lives per board meaning you are allowed to make mistakes, a lifeline to eliminate a random number of wrong answers and also two "find 1" chances to aid you on your way.

The game has a series of rounds and usually the top prize is £10 but I am yet to see a £10 board on Eliminator. £3 is the most I have managed and that was because the machine obviously was in a paying out mode and gave me an easy run.

It starts off always fairly easy with the wrong answers being often humorous spelling mistakes to try and catch you out...for instance instead of HSBC it may say HBCS and the name Ryan Giggs will be changed to Ryan Gliggs.

However when the money starts to draw near the answers become tougher. Music based rounds become obscure asking you to identify songs from particular bands with obscure b-sides on there, rare animal breeds and such like.

Its tough and of course when there is money on the line becomes unfair but its one of the most fun of the normal games to play and certainly the one I have won the most on.