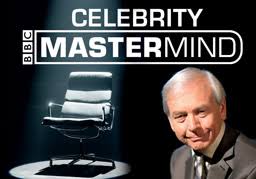 Celebrity Mastermind continues to air on BBC 1 in what is fast becoming a Christmas - New Year tradition and I was looking forward to this series as with all years. However I am not finding a great deal of enjoyment in this years series, or at least not the usual!

In the normal Mastermind episodes I tend to enjoy the GK rounds much more than the SS rounds. Indeed, when I do the Wiki Challenge it adds to the fun of playing along at home and I do indeed learn a great deal every week from it but usually the GK is where my main fun lies. However, in this Celebrity Edition, this year more than ever, the GK questions are so basic it is bordering on, no in fact its completely not, enjoyable for me.

In fact I am finding the easier and tamer SS rounds to be the most enjoyable part. I have enjoyed getting stuck into some subjects and learning facts and information about everything covered so far. Some I needed little work on but there has been some interesting ones. Some of the questions even on the obscure subjects (Expat Press in Paris being the most notable) and been gettable with some working out. But I feel a tad let down by the ease of the show this year in the GK rounds which I don't recall being as simple last year.

I am not quite sure the aim or intended audience of this show. Christmas University Challenge does a much better job with only slightly toned down sets, the usual channel and usual targeted viewer. However moving Celebrity Mastermind to BBC One in Prime slots with a show that does not reflect the actual real version is a different approach. I imagine viewing figures will be high again so I expect to see it back but it just would be nice to see something in there for the usual Mastermind viewer.

On an offshoot, I would also like to see this made into a "tournament" as they do with Xmas University Challenge although I do appreciate with the SS round this makes it a little trickier.

I know I am going far too much in to what is, to all intents and purposes, a light-hearted Xmas run of specials, but this could be so much more!

David Clark (Mastermind Champion) is covering the show episode by episode on the Life After Mastermind Blog HERE if you are keen to know which celebs did well.
Posted by DanielFullard at 10:18