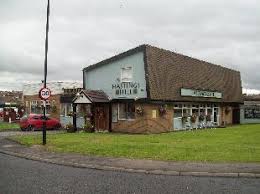 Last night I decided to head to the Hastings Hill Sunday Night Quiz. When I lived in Peterlee, a small town, there was a lot of choice for quizzing on a Sunday Night but since moving to Sunderland, where I imagined there would be much more choice, Sunday is one of the least active quizzing nights of the week.

Hastings Hill is a nice and friendly pub that hosts two quiz nights a week. They also have a team in the local quiz league in which I play so I am very familiar with the venue. The quiz kicked off at 9pm and was well attended with around about 10 teams, some of which were very large so there was a decent crowd in.

The quiz starts on a picture round, with a twist. A nice refreshing change to see! Basically, I gather, each week there will be a theme (this weeks was Famous Ships) and you use the pictures as clues. For instance, there are 20 pictures and you combine two to get an answer. Last night there was a black square and Babe the Pig leading to....Black Pig. The trick is the pictures are jumbled all over the page so its not as simple as it sounds and it is quite tough. You could in theory ignore the pictures and list 10 ships and try your luck which is one minor flaw, but its pitched in a way to avoid it simply being the "first 10 ships that will come to mind". And also given the winning teams only dropped 2-3 points working it out is much more sensible. A good opener.

It continues with a music quiz and again something fresh here that I am not sure I agree with but it still made an interesting round. You basically select to either identify the 10 old or 10 new tracks. You can make this decision after they have been played, hence scrap paper is handy. In a turn up for the books we found the "old tracks" to be much easier than the newer ones. (Being mid-20's this was something of a surprise).

The questions follow and the one down side is that there are only 20 of them. Don't get me wrong they were good questions, a nice connection round and  all but this part of the night felt "tacked on". It was as if it was the least most important part of the event. This is just me being snobby of course as given the attendance, the mood and the banter with the teams from the excellent quizmistress it is obviously a successful way to operate.

They run a few rounds of Card Bingo in between round which for many seems to be the big draw and its a well rounded night. I would say its more a "social" quiz than anything else that appeals more to perhaps people who don't usually attend quizzes or just enjoy a relaxing easy going quiz for a Sunday. Thats not to discredit the quiz at all. Its superb at what it does and I definitely enjoyed it very much as did my other half. Like I say the one downside being only 20 questions.

I certainly would go back again if I was in the mood for this sort of quiz and if you are looking for a good pub for a Sunday Night with an accessible quiz thrown in. Try it out!
Posted by DanielFullard at 11:29