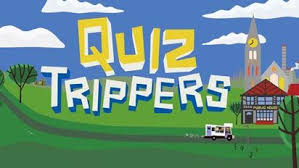 Well, after all the talk and the largely negative response the show had gained before coming to air, Channel 4's new teatime dose of reality began tonight in the form of Quiz Trippers!

I actually found the show to be quite enjoyable, light hearted, cheeky, "reality" and cheesy entertainment that is good for tea time viewing. All the quips and style is there for the successful and enjoyable Come Dine With Me show and Channel 4 have used the "If it aint broke.......just repackage it" approach to formula!

The quizzing side of things could prove interesting. I didn't expect too many actual questions and answers but I think we got a fair whack on this first show and the show had just the right balance. I think its going to be very interesting seeing all these weird and wonderful quizzes ran across the country, and although I certainly think there was an element of this quiz being, well not "fixed", but "styled" to suit the show it was still a fun part of the show.

The contestants have not made an impression on me yet but again with it being a key TV slot and a show intended to be more humorous than serious, it makes me wonder how actually "serious" these folks are about their quizzes. Obviously Kevin is having been on Mastermind and 15-to-1 but some of the others seem to have been chosen for various other reasons other than their ability to contribute to a quiz team!

Overall though this show was pretty much everything I was expecting and I think it has gotten off to a good solid start!
Posted by DanielFullard at 19:53